I want to offer you a documentary, directed and produced by myself, dedicated to the 50 years of Woodstock, but also a story that brings us back to the late sixties when I, at the age of 14, saw the original documentary of the festival for the first time.

I will not elaborate on how that movie has influenced a generation and in particular my life and my career, because I am sure you can already imagine it. I will tell you that in the course of my life, I have tried to embrace the spirit of Woodstock in what I say and in what I do. It is also the reason why I wrote, shot and produced this documentary without sponsors, without endorsement, and without TV networks or Productions Company.

Just as Woodstock had been able to offer three days of music without the support of any corporation, I wanted to follow the same path for the 62 minutes of my documentary. During these months I met attendees, photographers and musicians who took part in that glorious event; they told me about those days, but also how their lives changed over the next few years. I tried to capture its essence, its spirit. I wanted to convey to those who were not there (me, first of all) what that festival really meant.

I found the couple whose photo had appeared on the cover of the LP, VHS, DVD and other material related to the Woodstock festival; they are still together and I interviewed them. I found another attendee who "kidnapped" his girlfriend to take part in the concert and was also filmed in the audience in the original documentary, presented in 1970. I interviewed the collaborator of Michael Lang (Co-creator and organizer of the original festival) who also tells how, nowadays, we would still need a similar event (but not managed by corporations) because this world is hungry for peace, love and music.
I interviewed Jefferson Airplane's photographer, who describes how he was honored to take pictures in such a context and how he was chosen by the group to cover the event with them.
I therefore asked questions to Jack Casady and Jorma Kaukonen, the bassist and guitarist of Jefferson Airplane who played at the festival. I conversed with John Sebastian, one of the Woodstock performers, who was not expected in the initial "line up," but thanks to a downpour, can now say he played there.

Some of them saw the documentary and praised the spirit with which I shot it. For me, this is already a victory.

However, one desire remains, which is to show what I did to as many people as possible. As I said, I didn't do it for money, but out of gratitude towards a great event like Woodstock. It would be nice if you could please give me a hand towards this great new goal.

After watching it and only if you enjoyed it, a donation to cover the cost of making the documentary would be greatly appreciated.

Above is the link to my Paypal, even if you don't have a Paypal account, you can still make a donation using a credit card. 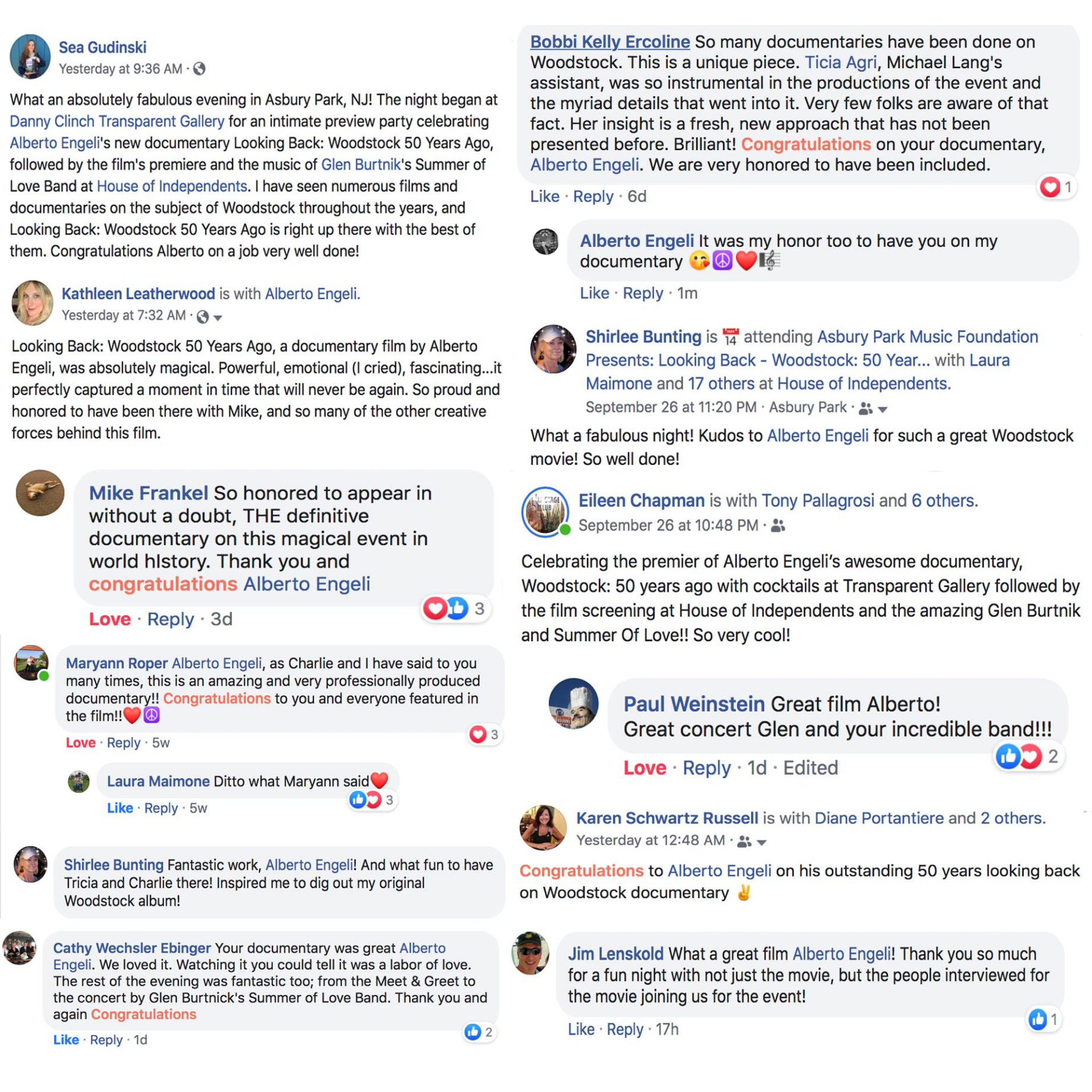 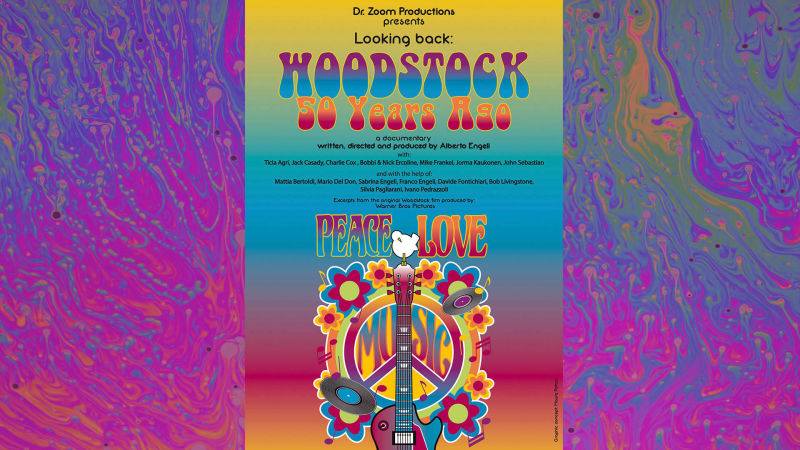 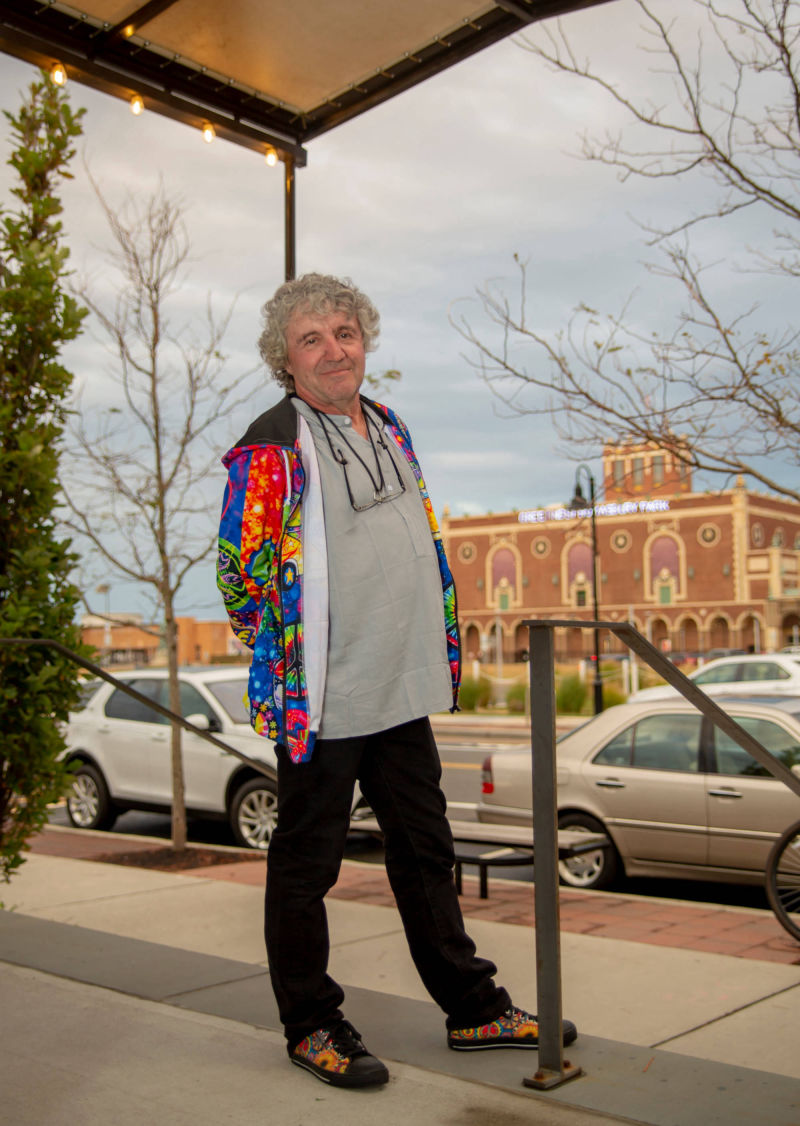 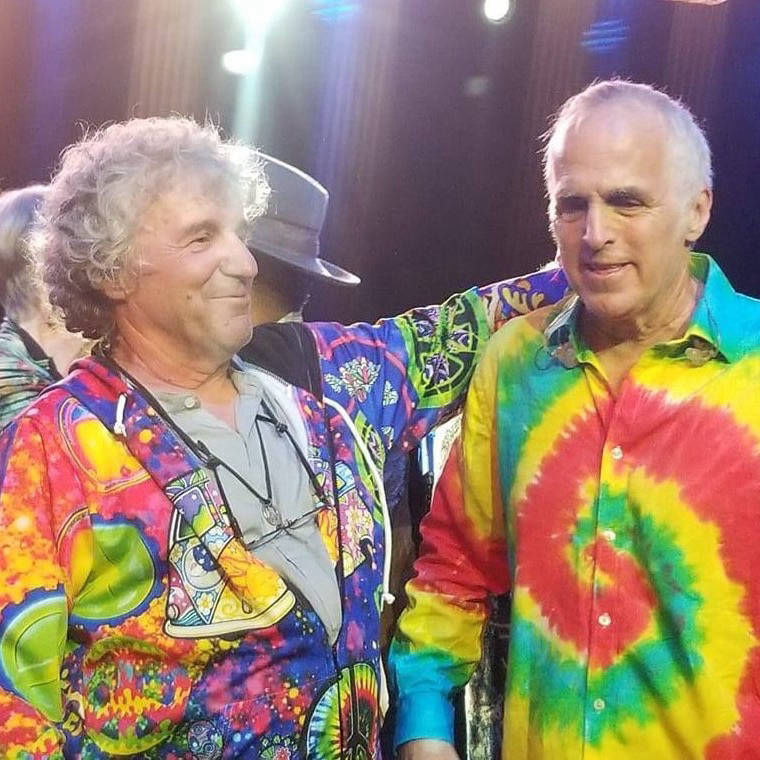 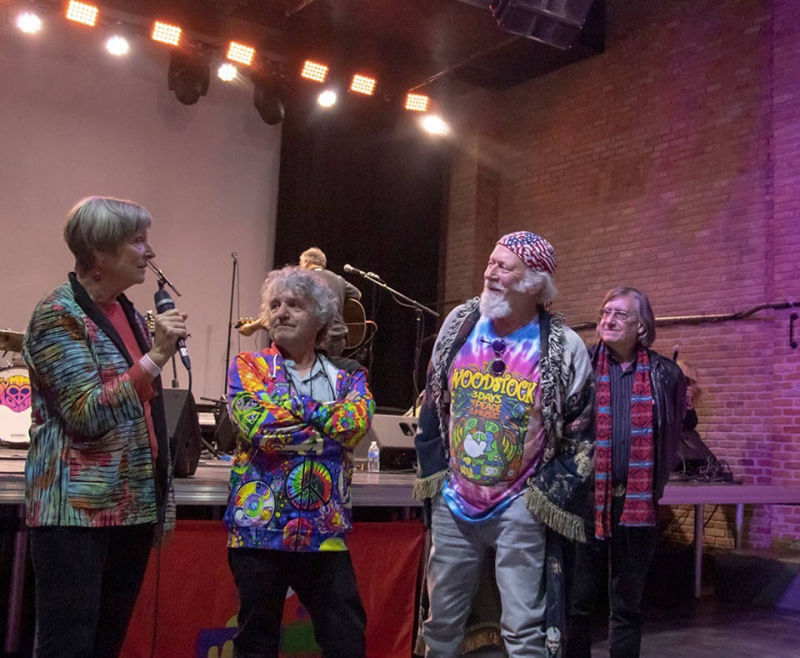 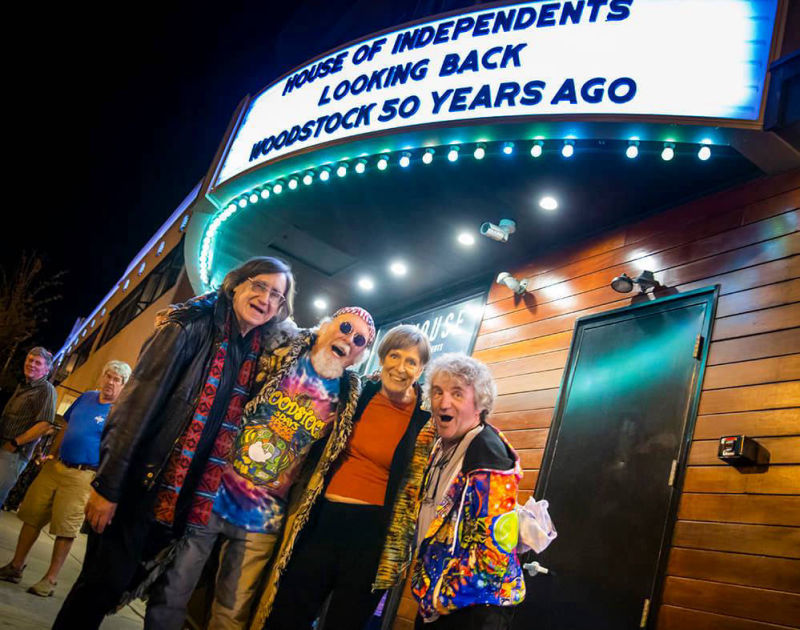 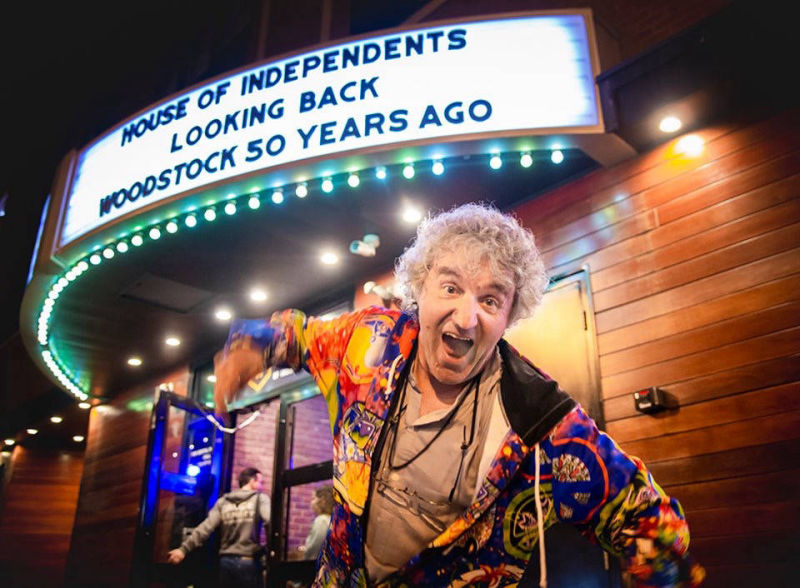 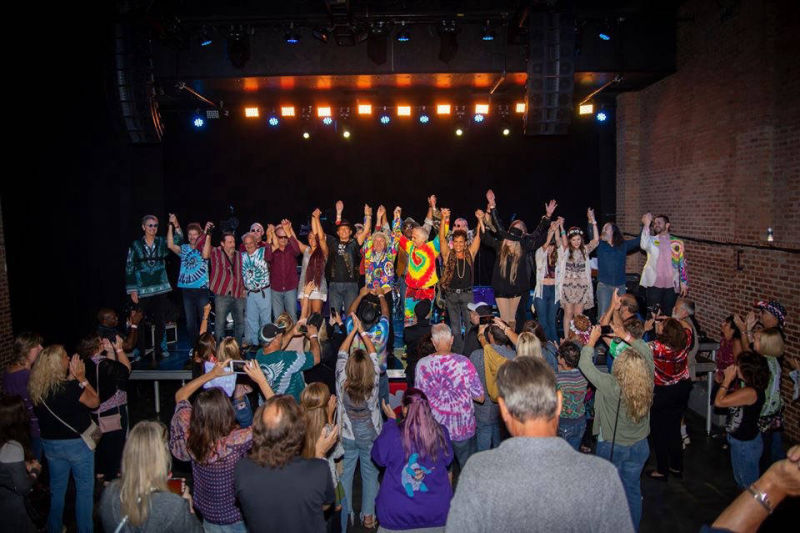 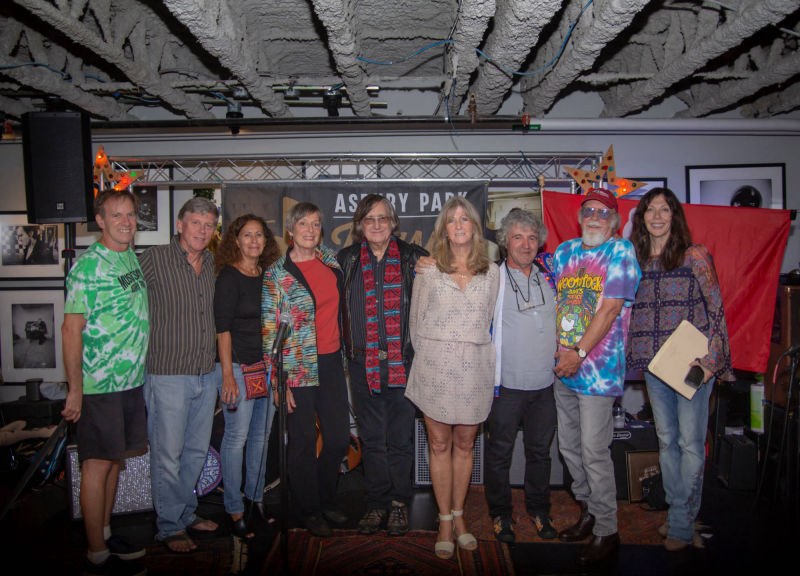 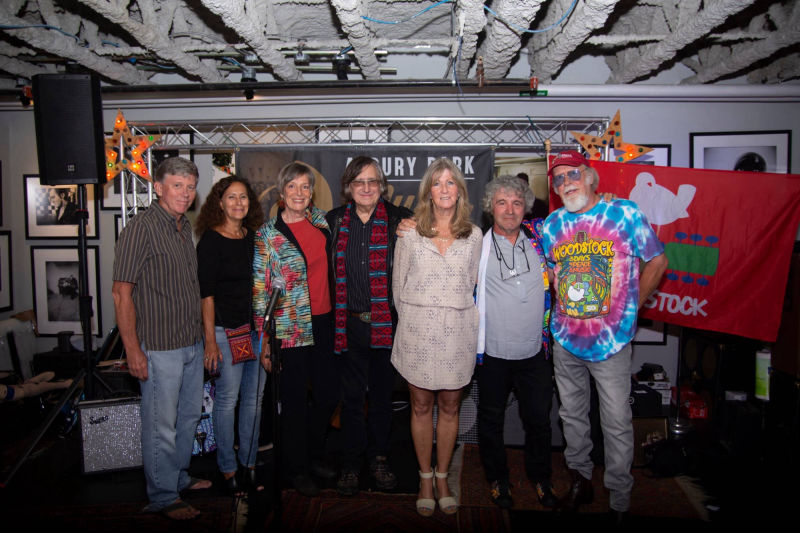 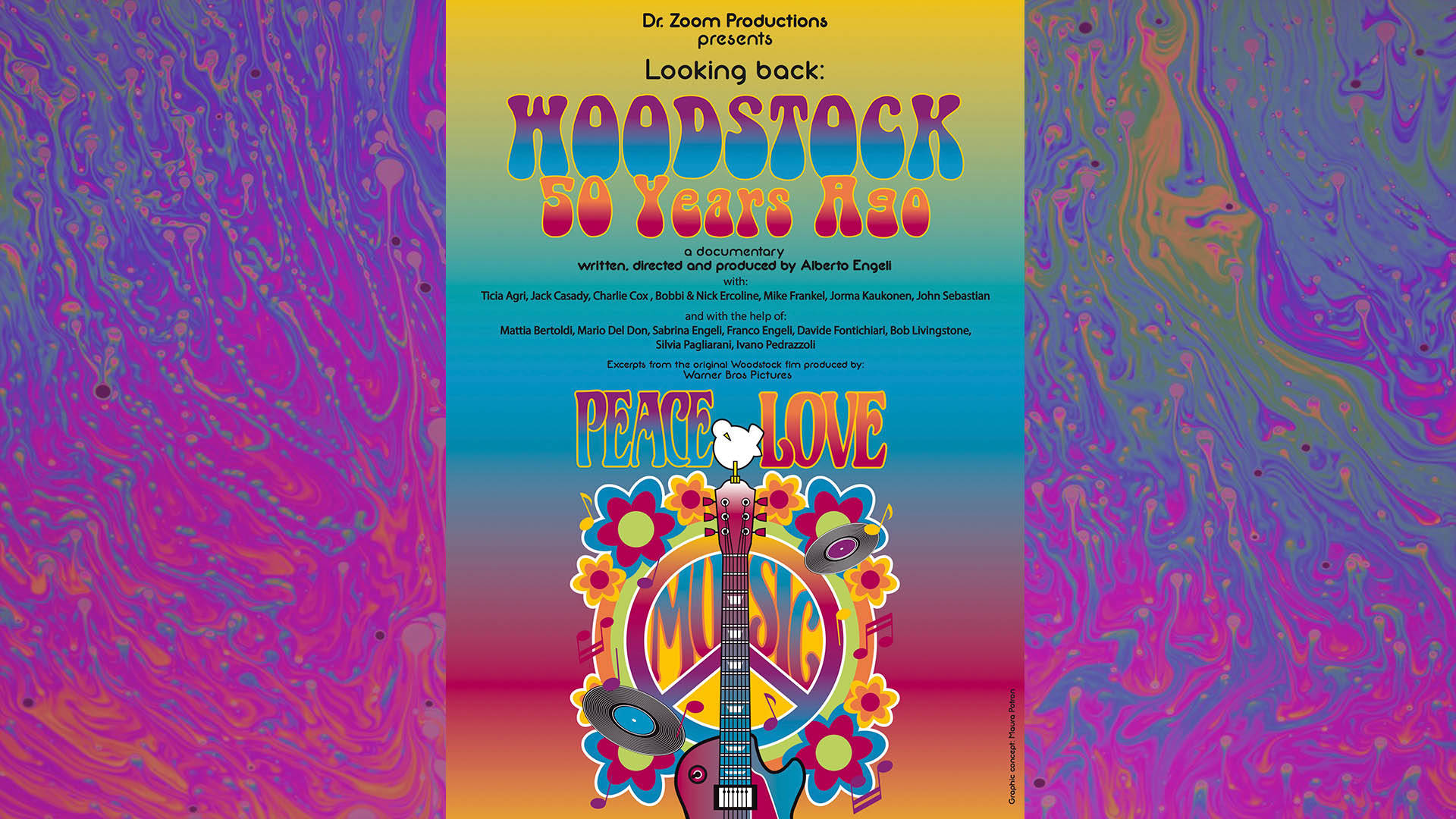 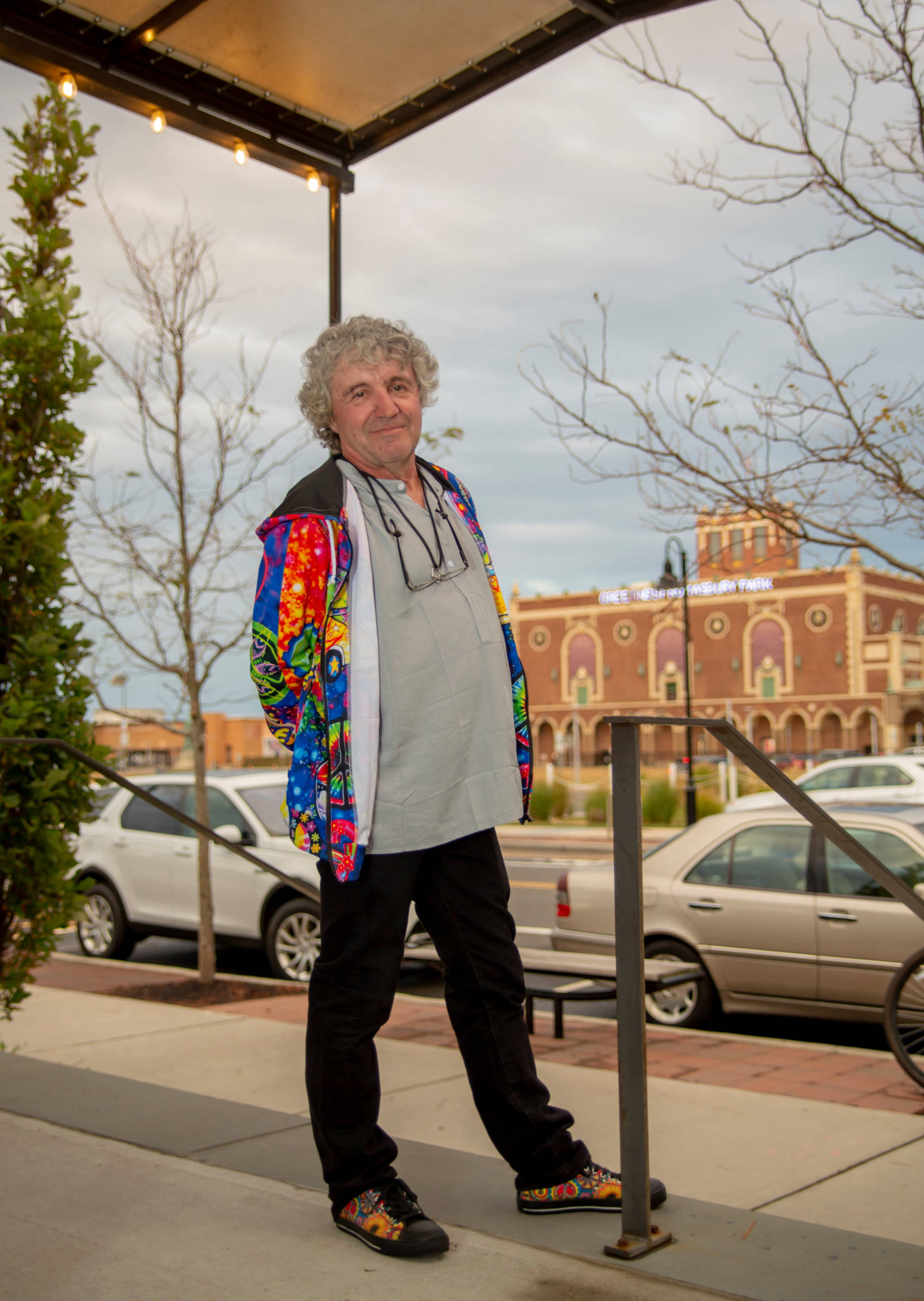 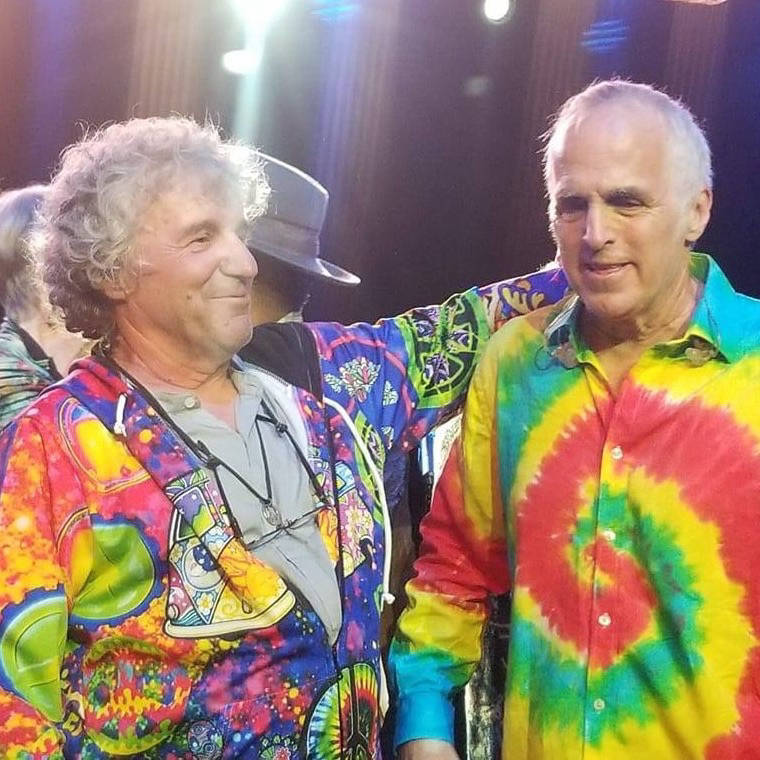 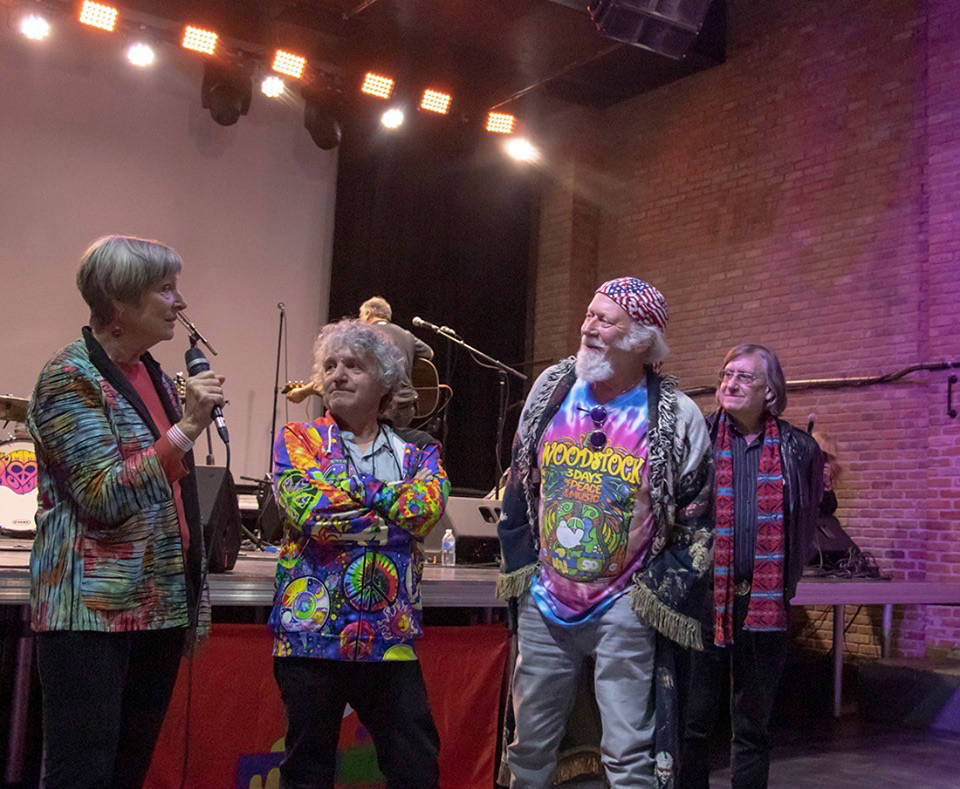 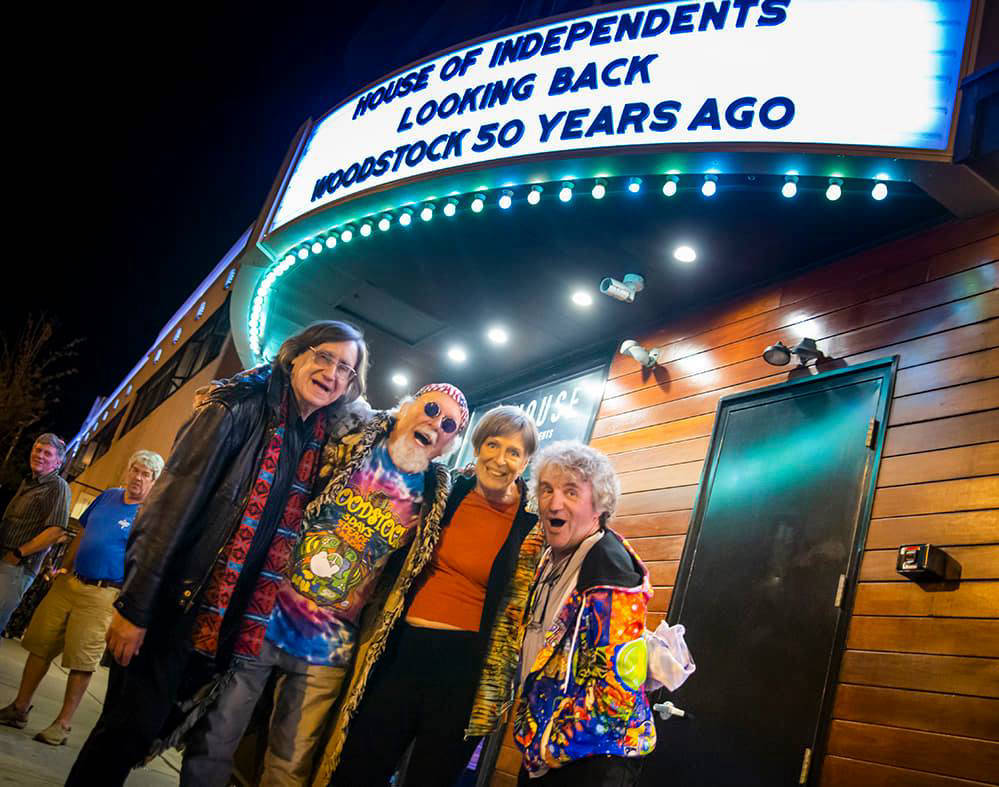 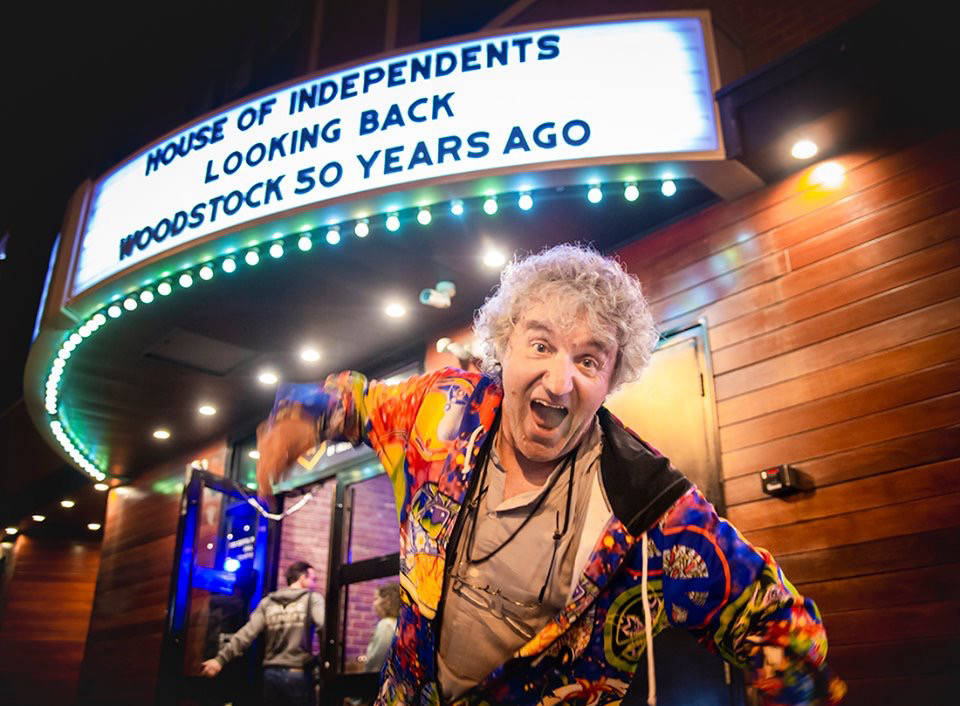 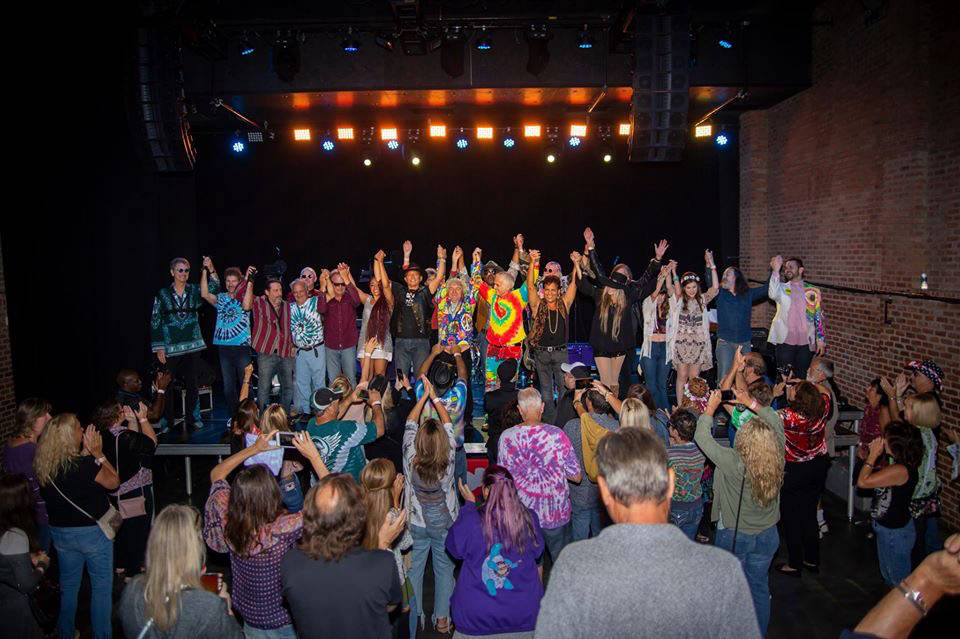 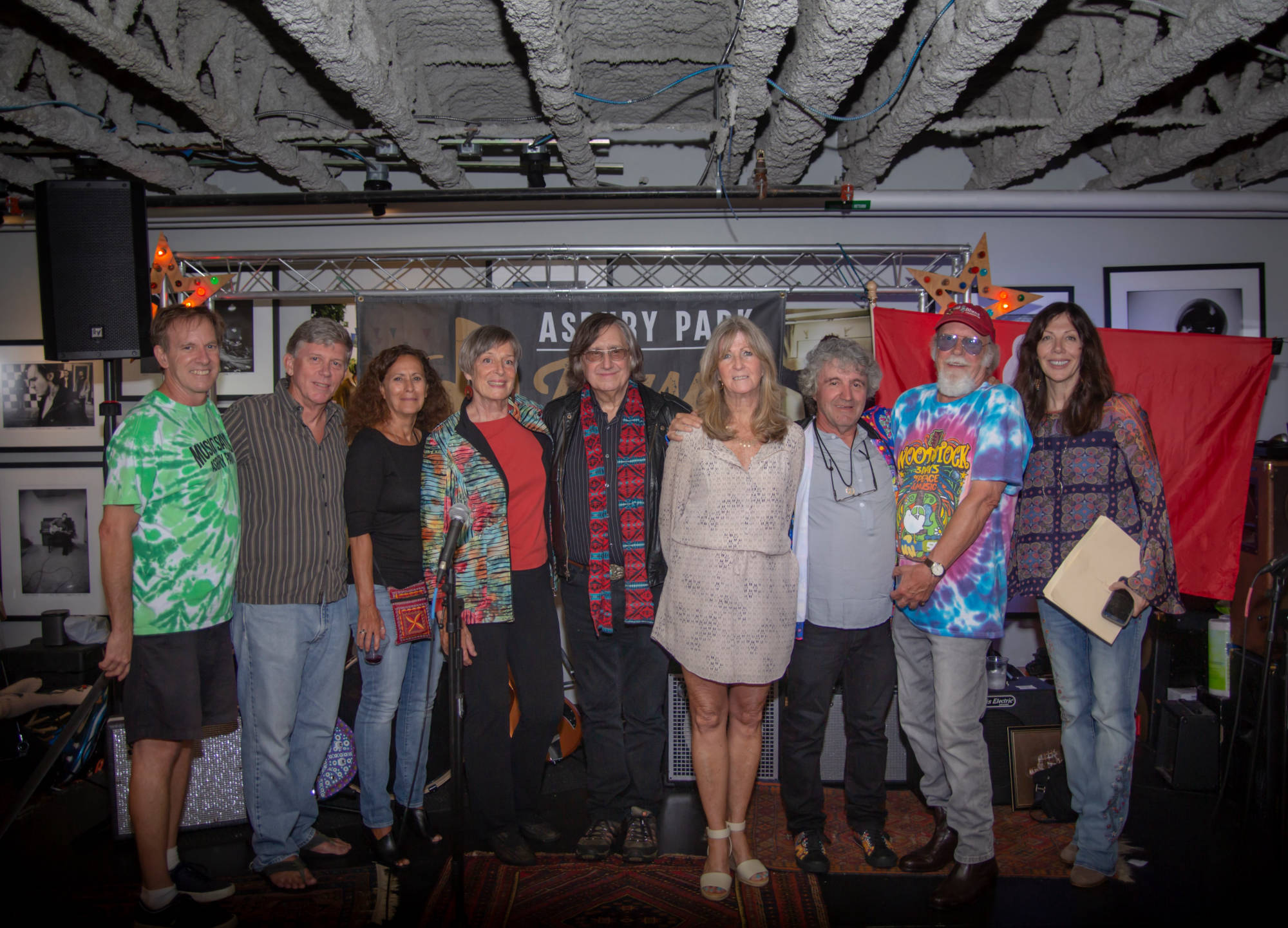 Disclaimer
Warner Bros. Entertainment Inc. - to whom it may concern
My documentary, “Woodstock 50 Years Later” was a “Labor of Love’’ and was about my passion for the original 1969 Woodstock message.
Therefore my desire remains; to show what I did to as many people as possible.
I have tried to embrace the spirit of Woodstock in what I say and in what I do. It is also the reason why I wrote, shot and produced this documentary without sponsors, without endorsement, without TV networks, and without a production company.
I have already tried through my lawyer to ask if you would be receptive to waiving your licensing fee in exchange for a negotiable fee of any future profits produced from the screening of my film at a public or private venue, but your request was out of my capacity.
I have therefore decided to publish the documentary on my site where people can make donations - donations that you can know at your request and deduct the costs for the realization of the film; we could divide it into 2 parts to be fair, in the spirit of Woodstock that was about giving and sharing.
PS - The footage I used can be found on Youtube and similar sites, published by users, where you do not earn anything.
This is in my effort to explore alternative opportunities, an inquiry to the creative film department of WB to ask them for a review of my documentary, which may prove instrumental in providing eventually other options for me.
Based on the response of the audiences who saw the film, it seems as if this could result in a win-win for WB and myself.
As I said, I didn't do it for money, but out of gratitude toward a great event like Woodstock. It would be nice if you could please give me a hand toward this new goal, especially in this moment, with what is going on in our country and in the world. We need PEACE instead of a harsh and nasty world.
Respectfully yours,
Alberto Engeli